I have a need to be on the first bus of the day.

It doesn’t matter whether I need to be or not. Something about missing it fills me with anxiety and despair.

I try hard to hide it. I try to listen to my travelling companions. I try not to stare at them. I try not to pace or rush or sigh. I’m better than I used to be.

I still need to be on the first bus.

That’s why we rose in the predawn dark to catch a quick cab to the long distance bus station where The Swede and I would catch a bus the two hours to Ya’an （雅安）, then a minibus an hour up the mountains to the Bifengxia （碧峰峡） gorge and Panda Research Base.

The Chengdu cabs had other plans.

I was wrong. The first bus was 7:30. Fifteen minutes to spare. Still time to eat breakfast, which I’d promised we’d have time to do. I rejoiced.

It was still Spring Festival. The bus station Dico’s Chicken, with its instant coffee machine, was closed. I despaired.

The convenience store with canned coffee, crackers, and a Snickers bar was open, though, and so was a tiny noodle joint with dirty pots, lots of steam, and delicious sour and spicy rice flour noodles (suanlafen 酸辣粉). It might not be breakfast, but it was something. I rejoiced.

And we still made the bus with a minute to spare, though my noodles got a dirty look from the bus driver.

Sleeping on the bus.

The ride was uneventful and we pulled into Ya’an a little under two hours later with no idea of where to go next. My guidebook said simply to walk out of the bus station and find the minibuses.

The front of the bus station had been ripped out for construction, making that difficult.

This is often the way things when trying to get somewhere small. Take the big bus to a big bus station, then wander around outside the bus station – but never exactly in it – for a while until you find some vans or minibuses or something that looks like a van or a minibus. Get jammed into the back by some guy that seems like he’s trying to hustle you, hand over some cash, wait 40 minutes next to a farmer with a duck in a bag, then finally get going. Assume that the bus-van thing will take you to the place you want to go while craning your neck in every direction hoping for some kind of sign that you are, indeed, going the right way.

You usually are. I am still unclear, though, as to whether any of the vans or minibuses anywhere in China are private or public transportation. It is one of the many mysteries of the East.

In this case, we did find the pack of minibuses, and we did take one of them after handing some cash being jammed in the back with a farmer, and we did crane our necks while we wove up a mountain road into the Sichuan highlands. After about an hour, we arrived at the Bifengxia Panda Research Base.

The Sichuan highlands surround the Panda Base entrance.

Bifengxia, which means Green Peak Gorge, was the second Giant Panda breeding center in China, opening in 2004 in order to spread the Panda population out to avoid catastrophe in the case of disease or other disaster. That paid off in 2008 when the Sichuan earthquake damaged the original Wolong center and some of the pandas had to be evacuated.

Aside from the animals themselves, though, the area also features some fantastic natural scenery, as you climb out of the gorge at about 3,000 feet elevation up on to a plateau at nearly 6,500 feet.

The ticket window was crowded, not only with tourists but with all sorts of cutesy plastic pandas, as well video screens trying to get you to pay extra to visit the zoo, where you could feed tigers and bears through a bus window. We skipped that, as well as most of the line. There were about 10 windows open but everybody was crowded around eight of them.

People in China often assume that if a line is long, its the one you’re supposed to be in. Then they try to cut to the front of it. We just chose the short line instead.

The entrance gate is at once side of the gorge, and the panda base is at the other side. Visitors can either take the bus around or they can take a giant elevator down into the gorge and walk to the base. Having seen pandas before, we’d mostly come for the walk so down the 50-story elevator we went. 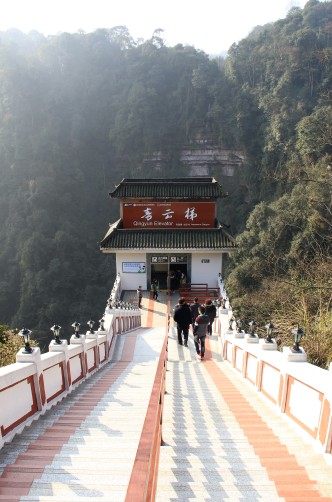 The entrance to the Bifengxia gorge elevator.

The Bifengxia gorge elevator from the gorge floor.

The gorge path wends along next to a river, reduced in dry-season February to little more than a trickle. The bruise-colored walls and spires rise on both sides, and greenery creeps its way up from the river to the gorge rims. At first, small waterfalls splatter down the overgrown slopes where ferns drip their own tiny waterfalls onto the concrete path. At one point early in the trail, the walker with decent eyesight can spy a handful of central China’s mysterious hanging coffins, nailed to the side of the cliff almost two thousand years ago.

But as the path continues on past markers explaining the area’s mythos, which is rooted in the very Chinese creation myths themselves, it starts to climb up past roaring waterfalls shaped like falling dragons, past placid pools of water where goddesses are said to have bathed, and across flatted stones and raised bridges where ancient monsters were vanquished. Platforms provide a rest from the stairs and opportunities to buy boiled eggs, liberally spiced fried potatoes (it’s Sichuan, after all), water, soda, or beer.

At last the trail winds out of the gorge and up onto the plateau, through a small collection of hotels, noodle stands, cafeterias, and tea orchards and into the panda base.

The Swede climbs stairs and light filters to the forest floor.

Hawkers sell spicy potatoes, yams, and corn by the stream. 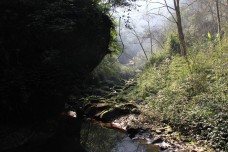 The path through Bifengxia follows a river before climbing out onto a plateau. 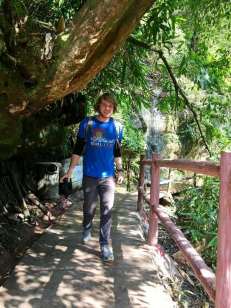 I walk past a series of small waterfalls and fail at not looking goofy.

The Bifengxia path climbs past some thundering waterfalls.

The panda base was a panda base. There are pandas. They live in pretty big pens. They don’t do much except eat bamboo and scratch themselves on trees, except for one panda who, agitated by something, would make a strange, breathy chirping sound, then run up to his “house,” cartwheel upside down on the wall, then urinate it.

Another highlight would of course be the cubs. We happened upon them by accident after following a footpath across one of the parks ridge lines, then running into a crowd of people peer over a wall looking down onto a long slope. There, just below the wall, were a pair of yearlings, wrestling and chewing on each other.

I counted only one person that threw anything at them.

Down the hill another crowd gathered around another panda cub, this one high up in a tree and way out on a flimsy branch, asleep. As he woke and started to move, the branches started to crack around him. For one breathless moment, he lost his footing, slipping up to his front armpits, back legs kicking the 20 meters of air below as more sticks crashed and broke on the ground. I could hardly watch.

At last he pulled himself up and in what seemed to me to be a controlled panic, scrambled back to the trunk and back down to the ground, fast.

The third highlight was the Panda trashcan.

The Swede poses in front of a pair of panda cubs.

We finished up our panda touring and took a series of buses back down to Ya’an and its under-construction bus station. We had enough time before our bus left to grab a quick dinner at a street-side restaurant, then set off for Chengdu.

We made it about 15 minutes outside of town when the bus broke down. Then all of us – a pair of monks, a few chain smokers and at least one Chinese guy and one Swedish woman who desperately wanted to find a bathroom and eventually just had to stumble down the hill into a bamboo grove – milled around outside in the light of the dying sun waiting for something about our situation to change.

We got the first bus to Ya’an. And the last one back. 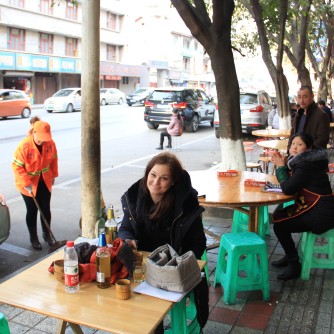 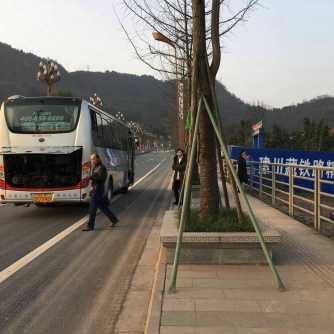 We wait roadside next to our broken-down bus for something to change.