Its a strange thing to turn off a major thoroughfare not two blocks from the heart of a city and into a post-apocalyptic vision. Though maybe not so unusual in China.

There’s always walking to be done, and so it was our first full day in Chengdu. With the shops closed for the holiday and the tourist sites clogged with the ambulatory masses, The Swede and I started south along Chengdu’s busy north-south axis, then ducked onto a side street. There, the world had ended.

Shattered and empty windows stared like unseeing eyes of dead, ancient leviathans, their skins and shells riven, their insides spilling out around their rotting carcasses. Each was marked with a symbol, 拆。I looked it up in my phone dictionary. “To tear open, or pull down.”

This one had been a convenience store, that one a mahjong parlor, the one over there a barber shop. Out of each leaked the telltale organs – torn up cartridges of candy bars, broken felt tile tables, a ripped up rotating chair – and other common tissues, too, like table legs, shattered mirrors, empty bottles, and even decades-old pin-up pictures of singers and dancers from magazines.

Here and there stray animals cried out and picked their way through the industrial offal.

Parts of downtown Chengdu have been slated for demolition.

Above it all loomed the real monsters. Story upon story of hollowed-out apartment block, the gaping wounds in the structures exposing the skeletal stairs and circulatory wiring that once held it all together.

We picked our way through the decay, stepping in here and there to check out the devastation. Other than the scavengers, which scattered at the sound of the stuff crunching under our feet, we didn’t see anyone else.

Those were our last few moments of solitude. Tianfu square had an opposite feel.

At the dead center of the city, underneath the watchful gaze of The Chairman and plenty of police,  locals milled around, twirled ribbons, and blew bubbles while the out-of-towners snapped pictures in front of Mao and a huge red banner wishing all the people a happy Spring Festival from the city government.

The Swede and I breezed through, snapping a few pictures of our own. As usual, I took too many of Mao. I’ve got a thing for statues of Communist leaders.

People gather on Tianfu Square despite the pollution. 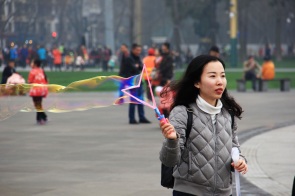 A woman blows a long bubble on Tianfu Square.

People’s Park, just around the corner, was even more crowded.

Amid the gardens, leafy pathways, man-made canals, and outdoor tea houses, people found their people. Some of them danced in the square. Some of them paddled little boats along the willow-lined waterway. Some fed fish with improvised food pellet injectors. But most of them just sat around, sipped tea, munched on seeds, and shot the breeze.

If Sichuan is anything, it is the tea house.

Tea houses are where public life plays out. They’re for afternoons with your friends and family, a friendly game of cards, a quick snack, or even some light gambling. They come in a few different forms, from the plastic chaired, living-room style found underneath apartment blocks all around the city, to the lacquered wood and opera performance style, the likes of which you can find under a bridge or two along Chengdu’s ring roads. But the most popular among locals are the outdoor tea houses in the cities parks, nudged up against canals or lakes and sheltered from the summer sun by pagodas and trees.

The seats, which range from creaky bamboo chairs to plastic stools, cost a cup of tea each. A cup of tea – loose-leaf bamboo, buckwheat, flower, and more, or a blend of a few kinds – runs between 10 and 20 yuan and comes with a hulking thermos of hot water for unlimited refills.

The century-old Heming Teahouse in People’s Park is Chengdu’s most popular outdoor tea house. There, The Swede and I managed to find an open table, ordered a couple of mugs – green bamboo and buckwheat, this time – and settled in under the budding cherry blossom trees and among the bonsai trees and rocks to plan out the next couple of days of travel and to relax after a few hours of walking.

We wound up striking a conversation with a nearby family, who’d relocated from Shanghai about a decade before. The patriarch looked over maps of Chengdu with us, pointing out the best food streets and parks, while the kids vied for our attention, handing us scraps of paper and mumbling English words before running off into the maze of tables around us.

At a century old, Heming Teahouse is a local landmark and a popular spot.

Water thermoses come in a variety of colors and with a cork. Most cab drivers have one in their cab trunk, too.

The Swede sips bamboo leaf tea. Buckwheat and the water thermos sit on the desk.

Glasses of green and buckwheat tea. 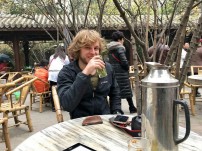 I drink tea in the park.

The man told us he loves Chengdu. People here, he said, are polite and helpful. Life is relaxed, slow, he said, without the bustle of cities like Shanghai or Beijing. There’s less pressure to climb the career ladder or show off wealth.  Sometimes Sichuan people get a rap for being lazy, whiling away their days in tea houses, playing Mahjong, chain smoking cigarettes, eating too-spicy food, and chatting with their friends. But, our Shanghai-transplant said,  that sure beats chain smoking in an office, and besides, Sichuan people do plenty of work. When they want to.

It was a refrain we’d hear from people throughout the province. As the conversation lulled, I heard the clang of a beaten tuning fork growing nearer. This was something I’d been looking forward to for two years: getting my ears cleaned in the park, again.

Armed with a headlamp, some cotton balls, and a set of hooked implements that look they belong in a dentists office or a torture chamber, ear cleaners roam Chengdu’s park-located tea houses plying their traditional trade. For about 50 yuan, they’ll jam those implements in your ears, scrape them clean, and even give them a good vibration with that tuning fork that also serves as their audible advertisement and calling card. It takes about 10 minutes for both ears.

Apparently, mine were filthy.

Getting my ears cleaned in People’s Park.

After a couple of hours in the park, we left to try to find the city’s tiny Tibetan district. We strolled through a couple old neighborhoods and along the river before stumbling upon a chintzy-but-kinda-cool, neon-lit bar/restaurant street, where we’d return later in the week for hot pot. Then we kept walking.

Suddenly, the Chinese turned to something unintelligible. We’d found the Tibetan District.

Nestled beneath the mountains, Western Chengdu changes fast from low-lying plains and bamboo forests to the dry and frigid highland wastes of the Tibetan Plateau. It’s possible to get to Tibet proper from Chengdu, but a good chunk of western and northern Sichuan itself is populated (a word used loosely here) by the high mountains and Tibetans, and that nearness has left its mark in Chengdu, especially in its own little Tibet, which spans a few small blocks downtown.

The leafy, lantern-lined avenue we walked was itself lined with shop after shop of Tibetan handicrafts and Buddhist religious artifacts. Monks in full garb, cell-phones in hand as always, walked the sidewalk in groups of two or three. Above the shops sat a variety of restaurants, although we could only tell based on the menus downstairs, as most of them didn’t have English or even Chinese signs.

Unfortunately, it being Spring Festival, all of these things – stores and restaurants alike – were closed.

The Tibetan District in Chengdu.

By then it twilight was approaching and the Swede had an appointment with the owner of a brewpub elsewhere in town. We took a cab through the dark, quiet, closed-up streets before arriving at the bar.