The cold winds shriek out of the Himalayan Plateau and warm as they howl across the western deserts. When they wail across the golden dunes of Dunhuang, the sands sing.

The ancient city of Dunhuang sits in an oasis where it once commanded a crossroads of the southern Silk Road into India and the northern Silk Road into the Hexi Corridor, or the “throat” of China – a series of further oasis towns, jammed between the Tibetian Plateau and the Gobi desert, that led into imperial China’s heartland and its former capitals. The earliest human settlements around Dunhuang date to about 2,000 BC, but by the time the Qin Emperor had first unified central China in the 3rd century BC, the area was under control of nomadic horse tribes. The Han Dynasty conquered the area in 121 BC, bringing it into the Chinese fold within which it would thrive until the Ming Dynasty abandoned the Silk Road nearly 1500 years later.

Now, Dunhuang still enjoys its status as an oasis town at a crossroads, only now it’s a tourism oasis at the crossroads of the rails and roads that head south into Tibet, west into Xinjiang and Central Asia, and east into China’s central plains. And it was the next stop on our journey to the west.

We arrived at the central train station early, and decided to walk until we found our hostel. We had two days in Dunhuang so we planned to catch the two major sights: The Singing Sands Mountain – a vast expanse of sand dunes – and the Mogao Grottoes – one of the largest, best preserved, and most important Buddhist historical sites in the world. As our next train left the next evening and we wouldn’t have time to shower ourselves free of sand, we opted to head to the sand dunes first.

First we needed to figure out how to dodge the fences and the fee.

Singing Sand Mountain is a national park and carries a hefty 150 Yuan entry fee, and I’d heard it was something of a tourist trap without much to see or do except walk into the sand. So I poked around and learned that it’s possible to circumvent the closed-off park area and get into the sands for free behind one of the adjacent hostels.

We found the hostel, eventually, after stopping to buy some neck protection and shrugging off Dave’s incessant worries about “water” and “hot” and “sand” and “tired” and “shoes”. Standing in a concrete basketball court, we prepared to walk out into the wind-whipped oblivion just as the day’s temperature peaked in the high 90s. But there was the matter of the fence.

Equipped every few dozen meters with motion detecting cameras and lined with rusty barbed wire, the fence shouts robotic warnings at anyone who begins to approach its perimeter. We saw, however, a trail of sandy footprints running adjacent to it, then disappearing over a rise, and we assumed we could get around it that way.

About five steps up the sandy slope, the fence’s siren started to blare and that female voice started to shout. Five steps more, and Matt began to yowl.

As the baking sand slipped into my tennis shoes, my feet, covered with socks, began to heat as if I were standing on a wood stove. Matt, on the other hand, didn’t have any socks, and his pseudo-sandals had plenty of holes.

I turned to see him flee down the hill as fast as I’ve ever seen him run. Back on the concrete, he hopped around chanting curses and pulling at his shoes like some demented shaman offering sacrifices to an angry god.

Dave and I weren’t far behind.

Matt’s feet were actually burned. It looked like 10 steps were as far as we were going to get. We milled around defeated – well, Dave was pleased – and started at the shimmering sands.

We stared at the sands, defeated by their heat.

Well, we decided, the park and its entrance fee had us, after all.

The main attraction, aside from the sand and the camel rides that take you into it, is the Crescent Lake – a natural oasis-turned-man-made lagoon which wraps around a recently built “temple”. In pictures it looks beautiful and remote. In person, the lagoon is more like a mud pit, and the city is just behind a moderately sized dune.

We walked the sandy path to the lake and were thoroughly underwhelmed. That entrance price was starting to grate. Ignoring more of Dave’s grumbling about “sand” and “looking stupid” we rented a few pairs of bright orange sand gaiters, and started the climb up to the top of the dunes.

For the first time all day, we’d done something worthwhile.

From the dune’s crest, the Crescent Lake looked its part – if you could ignore the dusty city sprawling behind it – a pool of vibrant life huddling amid a lifeless, alien sandscape. Turning 180 degrees, the dunes rolled out, endless in every direction, dotted by camel trains, glittering orange and gold in the blazing sun.

For some 50 generations, traders on camels just like those around us had trundled along those sands and listened to the wind’s song as it skipped across the ridges and warmed under the desert sun. For a moment, I lost myself in the waste. Then we bounded down. 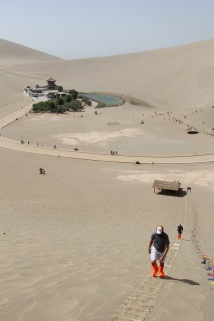 We climbed the dunes above the Crescent Lake. 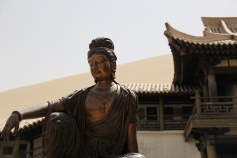 A boddhisatva watches over her temple. 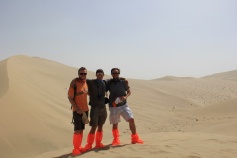 Atop the dunes, decked out in awesome gaiters. 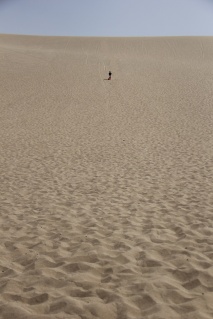 Bounding down the dunes.

We returned to our hostel in late afternoon, showered, then went to check out the downtown of the 170,000-person town, wandering among restaurants which spilled their tables out into bustling food streets, poking our heads into the town’s main mosque, and picking through a clothing market looking for good Chinglish t-shirts.

Lamb skewers were the food of choice along Dunhuang’s downtown lanes.

Mosque parapets rise above on of Dunhuang’s markets.

We stopped for some lamb skewers and a beer tower, then walked along the river as dusk turned to dark.

The riverfront, aglow, buzzed with people. We stopped to listen to a singer or two, before hopping across a river park on stepping stones that ran from concrete island to concrete island and stopped for a few minutes to marvel at the weirdness of a giant rubber duck foundering in the river’s drying muck.

Somewhere beyond, the ancient sands cooled in the evening breeze. The only thing missing was the singing. 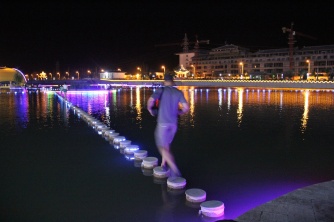 We hopped from stone to stone across the river park.