In Chinese, “Qiyun” means “as high as the clouds”. That’s true of Mount Qiyun, but only because the clouds slip down to meet it.

Rising just 585 meters above sea level, Qiyun strains, rather than thrusts, out of the dripping Anhui countryside. From heaven, clouds twist like the fingers of ghostly gods, stroking some of the mountain’s 36 ragged peaks and gripping others in a moist embrace.

For modern tourists, Qiyun is much overshadowed by its larger, far more physically impressive brother – Huangshan, less than 50 kilometers away – but through the passing of ages, the toppling and rebirth of dynasties, the wars that have riven China, Qiyun has stood as the epicenter of Taoism in southern China.

Perhaps it’s the millennia-old carvings of heroes and gods that glower out of Qiyun’s alcoves and caves that provide the air of mystery that have kept pilgrims climbing Qiyun’s steps since the 8th century. Perhaps it’s the natural scenery of the rocky peaks and the lush, river-split valleys below this one of Taoism’s four sacred mountains.

Or maybe it’s just the clouds, the way they wrap the mountain in their chilly fingers and cup peaks in their moist palms, deadening sound and fogging vision and spiriting visitors away from this world and its history, dynasties, wars, and concerns.

I read about Qiyun the evening before my last day in Anhui, and decided I wasn’t yet done punishing my legs. Getting there wasn’t easy, though. It was back to the early-morning bus station for more waiting and wandering and asking and wondering.

After a while, I learned that the same bus I’d taken to Hongcun the day before runs by the village at the base of Qiyun, but it doesn’t stop there. I’d have to ask the driver to make a special stop on the outskirts of town, then walk a couple of kilometers to the village.

I arrived at the crossroads an hour later, and the bus lurched to a stop. Sure enough, the peak to my left was “as high as the clouds”, and rain spit from the heavens. 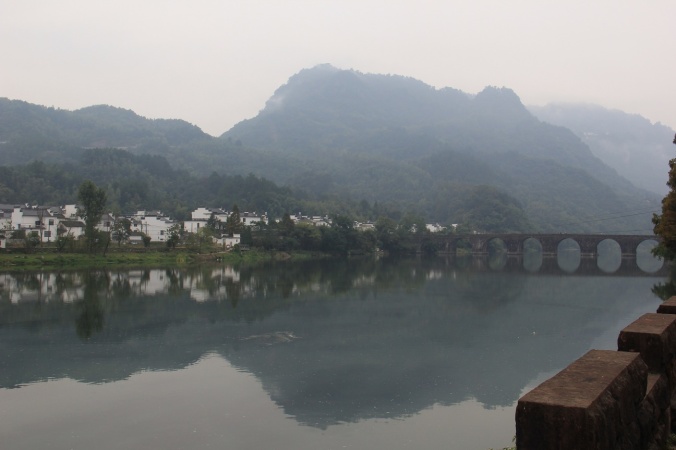 Mount Qiyun is wreathed in clouds above a Huizhou village.

As I walked toward the many-arched bridge that led to the mountain base, I stopped by a baozi shop to pick up some steamed buns and a local pancake filled with beans, peppers, and bean noodles, then promptly burned the skin off the roof of my mouth trying to protect them from the sog.

Compared Huangshan, the climb up Qiyun’s stairs was gentle and short, but in the rain and humidity, my pace left me sopping by the time I climbed to the main gate. From there, Qiyun’s paths wound along the cliff sides and up to its peaks. Everywhere, alcoves hid graves, altars, and shrines to Taoist heroes and gods, and hidden speakers whispered the plucked notes of a guzhen. Here and there out of the trees and rocks rose temples dating from the Song, Ming, and Qing dynasties. 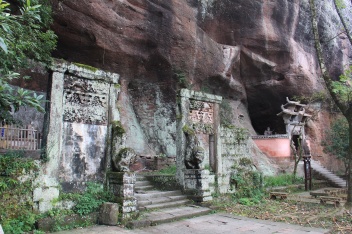 Perhaps the spookiest place on the mountain was a huge, sheltered recess which housed a few dozen statues and carvings. I ducked into one cave, lined on both sides with the crumbling visages of ancient priests. The cave plunged into darkness behind a large altar, and I tip-toed in.

The darkness was encompassing, but in the back reaches of the cave, golds and whites glittered in the dark. As I stood, waiting for my eyes to adjust to the black, bats squealed and shuffled just above me. I began to make out figures in the gloom.

Gods, or demons, many armed and many eyed. Some snarled and brandished weapons. Other just sat and stared. Silence, except for the bats.

Hundreds of inscriptions line the caves. 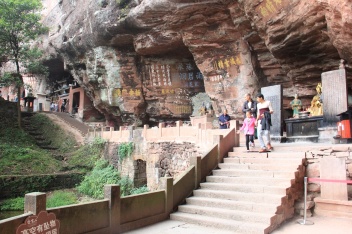 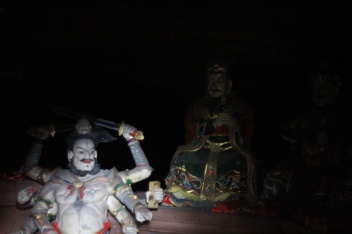 Gods and demons in the dark.

I battled a sense of unease that tried to force me back into the light, and tried to take it in. When I turned finally retreated out into the haze of murky daylight, an odd sort of relief washed over me, despite the thickening rain.

Out of the alcove, the path climbed to a plateau upon which sits an ancient village, its walls plastered white and its roofs black in the Huizhou style. The village clung to the cliffs, looking out on the river below which hugged the Anhui hills as it cut through more white-and-black hamlets. A giant yinyang was shaved out of the fields at the foot of the mountain, and all around clouds wreathed the trees.

More ancient temples were scattered among the Huizhou homes, many of which made use of their bottom floors to sell food and beer, souvenirs, or joss sticks for burning in offering to the gods. After clambering down one set of rain slicked stairs, I found some dinosaur footprints alongside a decorative archway that was more than 600 years old.

The village clings to the cliffs. 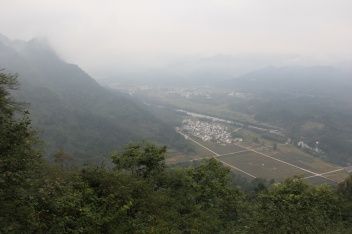 Anhui spreads out below.

An ancient gateway and dinosaur footprints.

I spent a couple more hours climbing up and down stairs, squeezing between rocks, and stepping through temple halls before the rain began to fall in earnest. I tucked my camera deep in my bag and ran to the top of the highest peak. From the top I saw nothing but the clouds and heard nothing but the drip of the rain.

Spirited away, just as Qiyun promised.

Without an umbrella or a rain jacket, I ran the paths back to the main gate, then down the stairs to the village below. I only fell once.

I arrived at the crossroads where the bus had left me, and I stood in the drizzle waiting for it to return. I tried in vain to flag down a few passing tourist buses, then finally stuck out my thumb. Only a moment went by before a middle-aged woman pulled up and asked if I needed a lift back to Tunxi. I thanked her profusely and asked how much she wanted.

“Just pay whatever you think is fair,” she said.

As we wound along the country roads I dozed off in the front seat and dreamed of clouds.