Don’t try to take the boat.

So don’t try to take the boat. 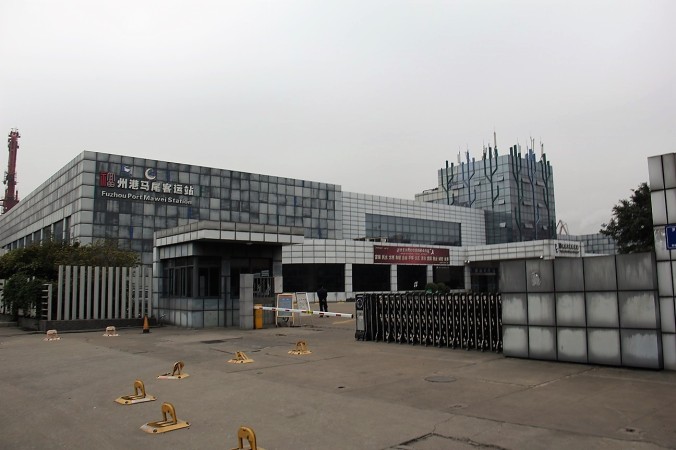 A boat place in Fuzhou. A place you shouldn’t go.

This past weekend a friend of mine needed to leave China on a visa run: out, stamp, in, stamp, done. Legal for 60 more days.

Flight prices had climbed higher than I’d have liked on the normal visa trips to Seoul or Hong Kong, and the timing of flights to Xiamen (厦门), where tourists and visa-runners alike can take the 45 minute ferry to the outlying Taiwanese island Jinmen (金门) were not so appealing (arriving 2:20 a.m. Sunday, leaving 9 a.m. Monday?). But after a little research, I discovered Taiwan owns another small island just off the Fujian Province (附件省）coast, this one a 1.5-hour boat ride from the provincial capital Fuzhou (福州). I’d not heard anything good about Fuzhou, nor had I heard anything bad, and my Lonely Planet guidebook didn’t have much at all to say about it, which I figured was either good or bad, so I booked a cheap “business” hotel in the port district of the city and a 1000 RMB (150$) plane ticket from Tianjin to Fuzhou and back two days later.

Fuzhou has a long history as a critical port, even serving as the sailing-off point for the most famous of China’s explorers, Admiral (and eunuch) Zheng He (郑和), who in the 15th century sailed several times from Fuzhou to the Indian Ocean and, on a few occasions, even to the African coast. Hundreds of years later after the First Opium War with Britain, the Treaty of Nanjing, which ended the war and humiliated the Chinese, also opened Fuzhou up to foreign trade (read: Western exploration) as one of five treaty ports in China. Fuzhou was open for saving souls and selling stuff to them.

Most relevant, perhaps, in the 1950s Fuzhou was on the front lines of the of war between the communist People’s Liberation Army and the nationalist Guomindang, or KMT, under Chiang Kai-Shek, and KMT aircraft bombed the city frequently after the PLA occupied it in 1949. By then, the KMT had withdrawn to Taiwan. Against the advice of many of his commanders, Chiang brilliantly left a substantial rear-guard force on Mazu Island — where we planned to make our run — to protect the main Taiwanese Island from immediate invasion and to serve as a base for the eventual campaign to retake mainland China. Huge characters in Chiang’s hand foretelling that event, which never happened, still face the mainland. For years, then, Mazu served a pivotal role in preventing the conquest of Taiwan as it was bombarded by big guns from the mainland, and some stories even tell of communist frogmen sneaking across the waters at night to slit the throats and take the ears of KMT guards in the island’s many military bases. Although Mazu still hosts a sizable Taiwanese military presence, hostilities have obviously ceased and those bases, forts, and tunnels serve as some of the main tourist attractions on Mazu, though tourists are warned not to wander far off the roads, into the unmarked minefields or unexploded bomb shells that litter the landscape.

Simple plan, then: Take the 30-minute Saturday morning train from Beijing to Tianjin, fly 2.5 hours, find the ferry port, take the bus downtown for the evening, catch the 9 a.m. ferry to Mazu Island (妈祖), rent a scooter, spend a couple of days exploring those old military fortifications and Taiwanese temples, watch an island sunset from a rooftop, catch the 2 p.m. ferry back to Fuzhou, take a cab to the airport, take the train back to Beijing.

OK, maybe not so simple, but still, it made sense, and for a while, it worked accordingly.

We flagged down a cab in the Fuzhou airport and loaded into the back.

“Mawei,” I told the driver.

“Ok. But you have to pay extra to go to Mawei. It’s way out of the way from where I was going. I won’t be able to get any pick ups there. One time I waited five hours,” he said.

We drove for a while.

“Yeah. Fuzhou is a good place. It’s developing fast,” he said we drove past a power plant venting plumes like an underwater volcano and through the skeletal ribs of half-completed highways. “But not Mawei. Nobody likes Mawei.”

Great, I thought. At least it’s near the ferry.

We drove on through construction sites and industrial plants. The driver ranted, flicking his hands around as he took them off the wheel, about foreigners coming to China and making easy money, while Chinese, like his brother, go to America and can’t even find a decent job.

“Why do Chinese go to America? I don’t get it,” he said, turning around to look me in the face. “They should stay here. I really don’t get it.”

He threw up his hands one last time.

The river near Mawei Port.

The hills near Mawei Port.

Later that afternoon after checking into the hotel and finding our room with not three but four unplugged floor lamps in a line against the wall, we took a bus up to the ferry terminal to make sure we could find it and also to check the departure times. Then we caught a bus to downtown.

One hour and a half of bouncing over unused train tracks and through unfinished subway zones later, in the dark, we arrived.

The centerpiece of downtown Fuzhou is the “Three Lanes, Seven Alleys” area, which has been revitalized as a touristy slice of Ming/Qing China.  Brand name shops and trinket dealers crowded the main strip, but the murmur of the tourists faded to footsteps in the lantern-lit alleyways where coffee shops added their bright glow to the fire-touched white walls. Just outside the historic district, a canal cut through a restaurant strip, and crowds lounged under the willow tendrils outside fish and hotpot restaurants of varying qualities, most of them out of my price range. Somewhere, a impromptu street band strummed and crooned in the night. Across the river, a man flowed through Tai Chi forms before hopping on his scooter, still in his traditional martial arts clothes, and drove away.

I can’t afford this restaurant.

A study in contrasts. 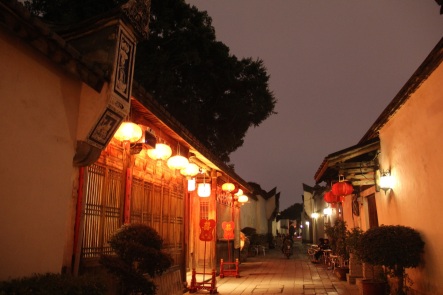 We rode bike-share bikes the five kilometers to our next stop: Fuzhou’s lone (maybe?) craft brewery, Pocket Brewing. As we rode nearly kilometer-long bridge across the sandbar speckled Min River, I passed a woman on a motor scooter. She drove, headlight off, earphones in, watching a movie on her phone, which she propped up on the left handlebar.

The taproom was typical, if a little messier (Halloween and Christmas still happening–at the same time!), than the norm (wood tables, exposed metal) but the beer was decent (especially the passion fruit stout). Next to our table, a group of increasingly drunk young businessmen order flight after 20-glass flight (shaped like an airplane, heh), knocking them back like shots while chain smoking and chewing on pickles and pea pods. A bowl of crab claws they left mostly untouched. After a while, the drunkest of them ambled over to our table and started shout-slurring stuff while his friends tried to coax him back. He pounded the table and bellowed something like “Ammerrrca!” over and over glowering crooked at my forehead, then asked if he could kiss my friend. Without waiting for an answer, he pecked her head.

He turned and kissed me on the head. Everyone laughed. He turned back, grabbed her by the face, and kissed her on the mouth.

“Bu bu bu bu bu!” his friends screamed. This time, he didn’t scream back. He just swung around and latched on to my gaping mouth with his spirit soaked lips, writhing like still-glistening worms stranded out on the sidewalk on a warm-but-not-hot summer day. His friends wrenched him off me, undoubtedly waiting for me to take a swing, and tried to drag him from the establishment. He grabbed a shelf showcasing bottles and cans of rare beer. They began to rain down on the table, a dangerous, unforecasted precipitation. At last, three of them together pried his hand off and bulldozed him out of the bar as he shouted “Ammmmercaaaaaaaaaaa!” one final time.

The businessmen left at their table made it up to us with no small amount of beer.

A morning mist hung over the harbor, slicking the streets with a greasy moisture and blurring the cranes on the horizon to fuzzy orange stickbugs, stabbing at the sky. It looked like the back of my eyes felt.

Still, we were up and stepping off the bus early to catch the 9 a.m. ferry.

The guard at the gate stepped out of his shack.

“You going to Matsu?” he asked.

“Yes,” I said, stepping cheerfully past him.

“It’s not running today,” he said. We stopped and turned.

“It can’t go. It’s not running today. Come back tomorrow,” he said.

Our flight back to Tianjin was “tomorrow”.

“Are there any other ferries to Taiwan?” I asked, The haze cleared from the back of my eyeballs as the hot sun of desperation burned through, and the grease slid sour into the back of my throat.

He must have seen my shoulders sag with relief.