After five hours on the tarmac – nearly 10 total on the plane – a pair of two-hour delays, and another two hours sitting in the basement of the Bangkok airport waiting for the metro service to start, it was a relief to finally step into the heat-soaked air as morning light began to gray the Thai sky.

My hostel was situated in the heart of Chinatown – ironic, I know, or maybe comfortable? – and as I stalked half asleep through the streets I got familiar with the defining characteristics of Bangkok: Swelter and bustle.

Packs of motorbikes ripped through the crowded streets alongside gaudy Tuk Tuks, each spewing bluish smog that gave the city a whiff of gasoline and seemed to add to the boiling air. And it was only 7 a.m. 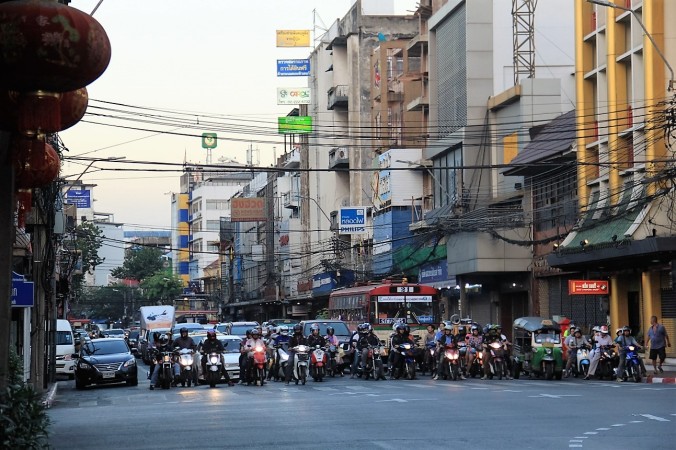 Bangkok is overrun with swarms of motorbikes.

I found my hostel among Chinatown’s twisting alleyways, sandwiched between car-parts shops overflowing with piles greased and rusting gears and rods, and I checked in nearly nine hours late. After a cup of much needed iced coffee on the rooftop terrace overlooking the sound-clogged alley, I passed out under the air conditioning. When I woke in the early afternoon, it was time to explore.

Chinatown is one of the older neighborhoods in Bangkok, with a history of more than 200 years dating to when the Chinese community in the city relocated to the “new” neighborhood to make room for the construction of Bangkok’s Grand Palace on the riverbank.  Part colonial architecture, Chinatown is still a rat-maze of warrens lined with the aforementioned parts shops and makeshift markets selling fruit, flowers, stereo equipment, and pornography. 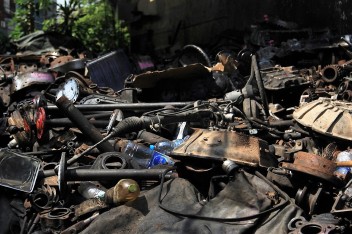 Piles of car parts spill out into the street in Chinatown. 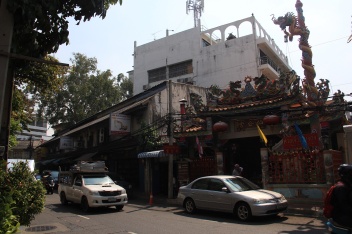 This temple is typical of the dozens of little Chinese-style temples throughout Bangkok. 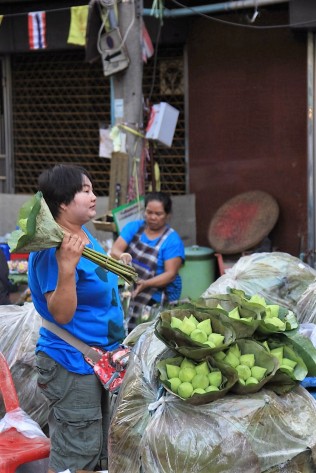 Vendors sell flowers of all kinds in Chinatown’s flower market.

Yaowarat Road is the main drag through Chinatown.

A woman sells peppers in

I spent my first day popping in and out of said temples and wandering the market streets before watching the sun set over the Chao Phraya River, which bisects the city and acts as an artery for both tourist boats and trade.

As the neon lights lit up above me while I ate street-vendor pad thai at a fold out table street-side, I was struck that Chinatown indeed feels like a mini Hong Kong. Only maybe hotter. 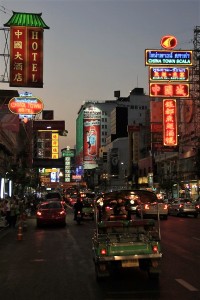 Chinatown’s neon signs give it a Hong Kong feeling. 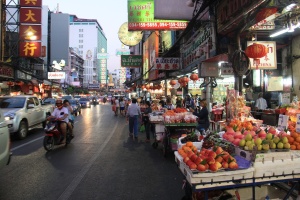 Early the next morning I relocated to Bangkok’s famous – or infamous – Khao San Road, long a hive for Southeast Asia’s unwashed backpacker army. The culture of the place was immediately obvious, the street littered with discarded food trash and browned cigarette butts from the night before.

I sought out the cheapest bunk I could find in a hostel three sets of stairs above an Indian restaurant – a creaking metal contraption in a room of 12 others just like it, topped with a stained mattress and no sheets. It wasn’t going to be good sleeping, I knew, but at just over three USD for two nights, at least it was cheap.

I threw my bag down and headed back out, across Ratchadamnoen Road lined with both its massive portraits of the Thai king and the city’s Democracy Monument, and toward the temples that bump up against the river. 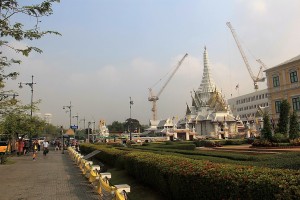 One of the many temples packed into the area next to the river. 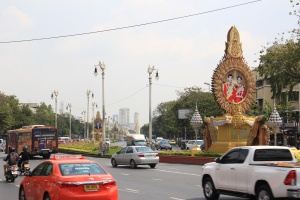 Pictures of King Rama the IX line the road to the Democracy Monument.

I picked out Wat Pho, one of Bangkok’s oldest and most important temples.

Despite their shared Buddhist focus, Thai temples and Chinese temples could hardly be much different in style. Wat Pho is a collection of glittery, bright spires and halls under the watch of fierce-faced stone Chinese guardians. Built sometime in the late 1600s, before King Rama I established Bangkok as the kingdom’s capital, the wat is home to Thailand’s largest collection of Buddhist images – more than 1,000 – and a 46-meter long reclining Buddha.

After a couple of hours wandering the various halls, removing my shoes at the entrance of each to walk barefoot as is the Thai requirement at holy sites, I walked back along the river to Khao San to find the street transformed. Vendors selling  mostly t-shirts, but also jewelry, DVDs, and fake IDs of all kinds had billowed out into the street. The bars and restaurants were already bumping. 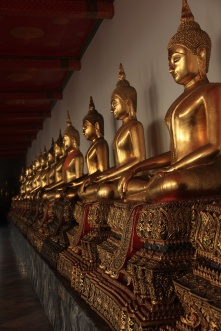 There are more than 1,000 images of the Buddha in Wat Pho. 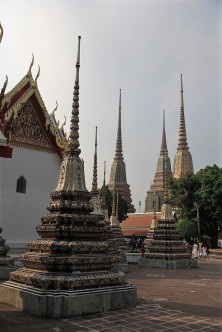 Wat Pho, like other Thai temples, has uniquely Thai architecture. 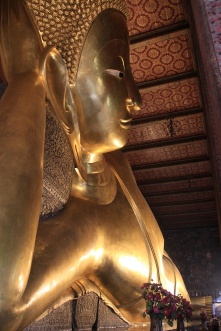 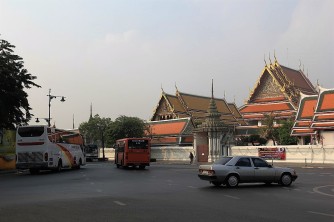 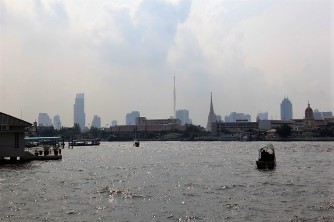 The river runs through Bangkok

I walked the adjoining streets, trying to find a cheap towel and marveling at the sheer variety of tattoos and dreadlocks that covered the areas short- and long-term denizens, then pushed my way back through the crowds of revelers dancing in the street as the restaurants transformed into open-air nightclubs blasting hip-hop and electronica into the thick night air.

When I finally returned to my bunk room, I found that despite the two rotating fans rattling on the ceiling, the place was hotter inside than out. I crawled into my bunk, trying not to pull the whole thing down along the way or make more noise than necessary, stripped to my shorts, rolled those up as high as they could go, and positioned myself at the very edge of the bed where every 10 seconds or so I could catch a quick blast of the fan.

Sometime in the next couple of hours, I feel asleep in a soggy nest of my own sweat. Sometime in the next next couple of hours, a group of other backpackers filed in. The hostel management finally deemed it appropriate to turn on the air conditioning – at the lowest possible temperature. My sweat turned to ice. I pulled out every item of clothing I’d brought, including my coat, and spent the rest of the night shivering anyway.

“Just three dollars” I kept telling myself. It didn’t seem well spent. I’d never again be so happy to walk out into the Bangkok sun.