I kept myself from saying it: Toto, we’re not in China anymore.

Over some 5,000 kilometers we’d ridden the rails – and sometimes the broken roads – traversing the expanse of China, from the eastern capital to western edge.

Kashgar. The westernmost city in China.

In China? I wouldn’t have guessed.

The call to prayer drifted through the tree branches and over the minarets of the Id Kah Mosque and across the balcony of our hostel. No loudspeakers; only the voices of the faithful.

From the hostel balcony in Kashgar.

It’s not uncommon to find camels and horses tied up on the sidewalks.

The warbles drifted over the mosque walls and wafted across the square, slipping past the camels, horses, and bread vendors. They danced amid the head scarfs and floral-patterned sleeves of  the Uyghur women and the black-and-green hats and drab sport coats of the Uyghur men and past their cropped and gently pointed beards.

The cries slipped through the twisted desert-sand alleys where smithies and blanket makers and wood carvers and watermelon vendors scrape and grind and stuff and sort and shout. They wended around the shirtless boys who wrestled against the sandy reconstructed city walls scratched white with Uyghur script and blew through black hair of girls who threw dirt at each other and squealed underneath the painted murals and oxidizing crescent moons and the squalor of the ongoing tear-down of the old city.

Tucked in doorways, craftsmen work metal and wood outside their homes. 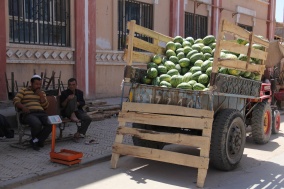 Xinjiang is renown for its watermelons. 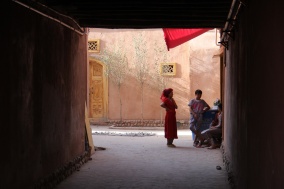 Kashgar’s alleyways twist and duck through the old city. 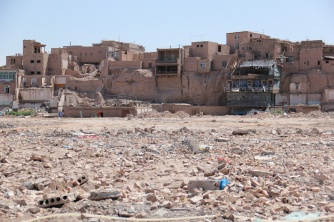 Kashgar’s old city is being torn down and being replaced with more “Tourist-friendly” construction.

On the outskirts, the notes bounced through the 2000-year-old Grand Bazaar from dog skin to wolfskin, from carpet to headscarf, from spice bin to tea bunch, from musical instrument to dope-smoking implement, off of roasting legs of lamb and then melted into the vats of iced and fermented milk at the intersections. 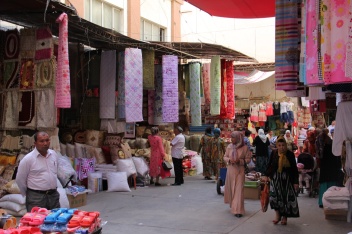 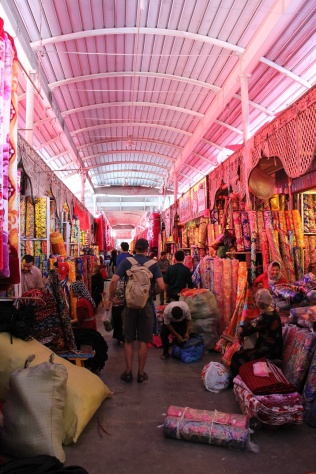 Silks at the Kashgar bazaar.

That is definitely a dog pelt. 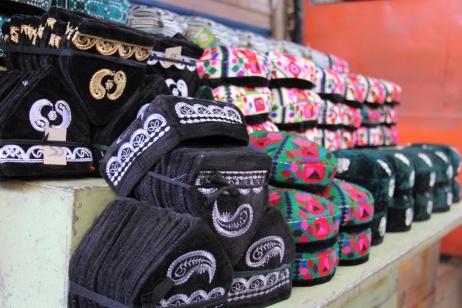