This weekend Jordyn and I took a trip to England. And Italy. And Germany. And the whole time, we stayed in China.

Tianjin is one of those places that all the foreigners in Beijing say they’re planning to go to, eventually. Even though it’s only 30 minutes away by bullet train, most of them never do. We finally did.

At 14 million people, Tianjin is the fourth largest city in China behind Shanghai, Beijing, and Guangzhou and is one of the country’s four direct-controlled municipalities along with Shanghai, Beijing, and Chongqing. It’s location on the Bohai Gulf as well as on the banks of the Hai River, which connects northern China to the Yangtze River via the Grand Canal, also made it one of the most important ports in China, especially after it was forcibly opened to French and British trade by the Treaty of Tianjin, which was signed in 1860 following China’s defeat in the Second Opium War. Over the following decades, Great Britain and France were joined by Japan, Austria-Hungary, Italy, and Belgium in establishing self-administered foreign concession areas in Tianjin, each with its own government buildings, public facilities, and neighborhoods.

That’s what makes Tianjin so interesting: The city is a patchwork of early-20th-century European buildings and avenues that trumpet the cities colonial past and steel-and-glass skyscrapers that announce its intent to own the future. And underneath it all scoot the overstuffed electric tricycles ubiquitous to China.

Sunday was Qingming festival, or Tomb Sweeping Day, so I was off work. Jordyn also had Monday off, so we decided it was time to take the trip. We’d tried to do the same with Toby on the same weekend last year but showed up to the train station too late and didn’t have time to make the trip. This time we planned ahead and bought tickets a few days before.

Tianjin is a walking city.

There’s the old downtown, lined with European-turned-Chinese banks of the columned variety, most of them (of course) webbed by renovation scaffolding during our visit. 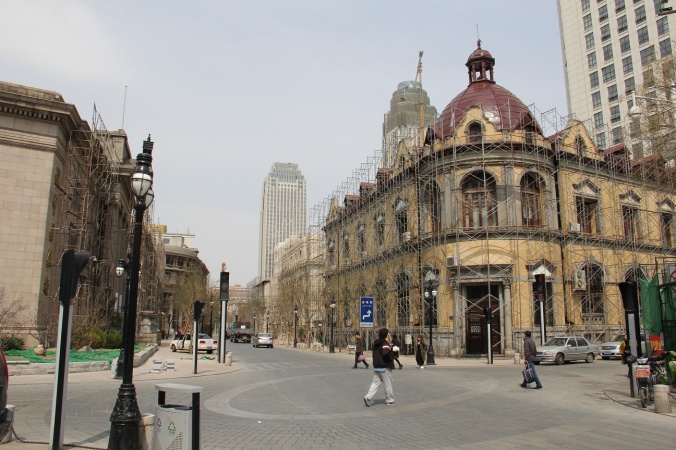 Tianjin’s downtown is mostly banks built during the early 20th century to house European companies. These days they are mostly Chinese banks.

There’s the riverside parks, lined first across from the train station and a giant clock with the old British treaty port, then with fishermen, then with the skyscrapers. 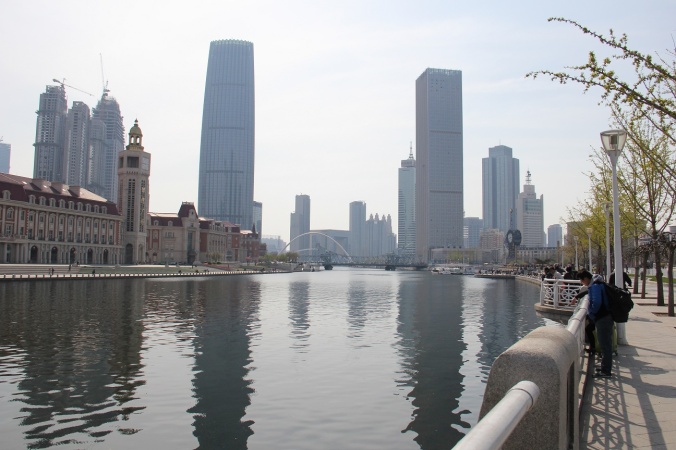 The treaty port sits on the river across from Tianjin’s train station. Past the bridges down the river, the city’s skyscrapers project a different attitude. 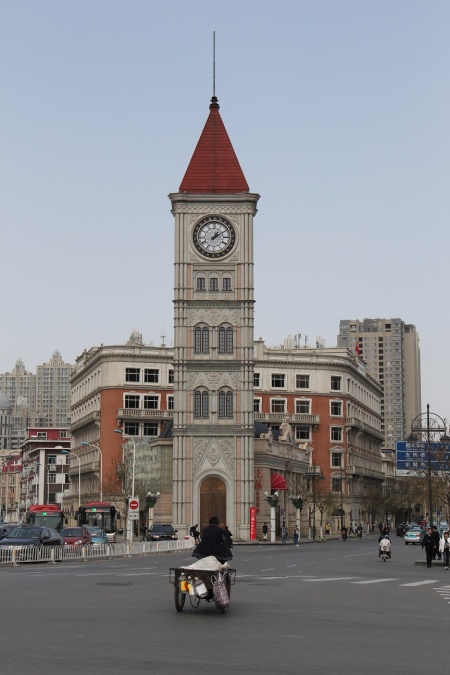 This clock tower marks the entrance to Tianjin’s Italian concession, complete with gold statues, fountains, and lots of cheesy Italian (and German?) restaurants.

There’s the creepy China house, a house lined with tourists and constructed entirely of concrete and vases or pieces of vases. 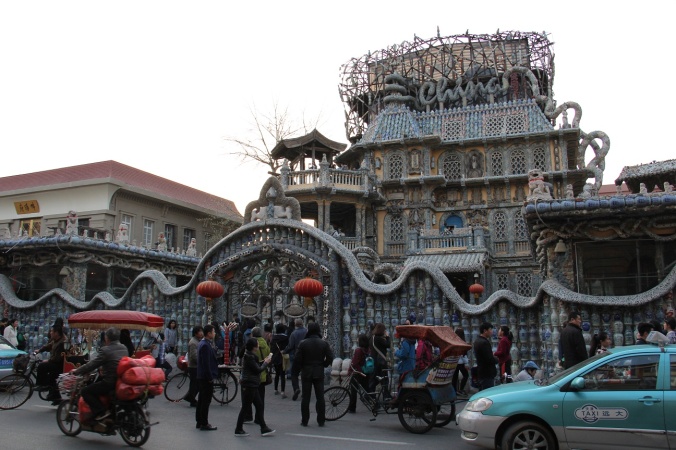 There’s the wide avenues, lined with buses and cars and where, on Qingming, you might catch a man burning piles of paper money for his ancestors in the middle of an intersection or a group of people trying to keep the grass from catching on fire when their paper money takes off with the wind. 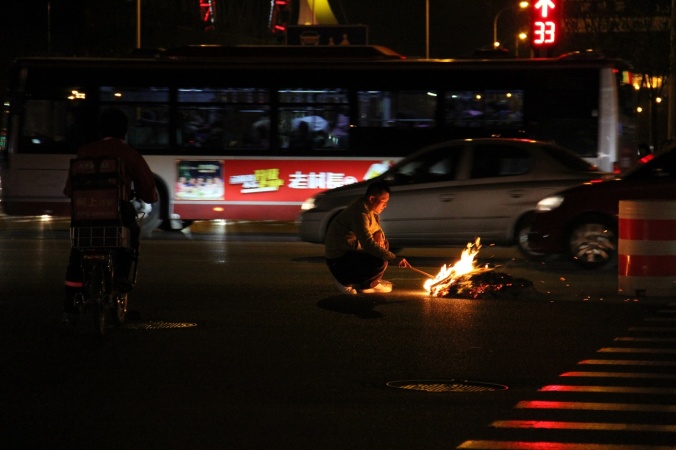 On Qingming, people burn paper money as well as iPhones and other gadgets, for their ancestors to use in the afterlife.

There’s the Yongle Bridge, topped with the Tianjin Eye, the world’s only Ferris wheel ( (120-meters) built on top of a bridge, and lined by a riverwalk where revelers launch flaming lanterns into the night. 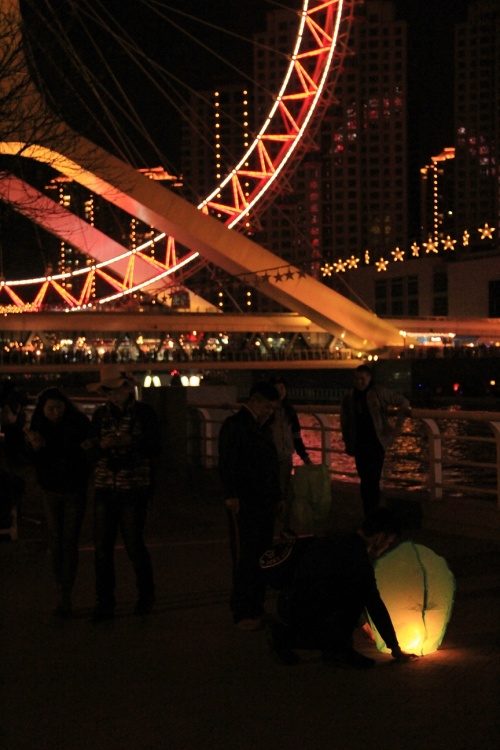 Evening celebrators light floating lanterns under the glow of the river-spanning Tianjin Eye, the world’s only Ferris wheel built on top of a bridge.

There’s the 五大道 wudadao (five big avenues) area, lined with blossoming trees and the mansions of former government officials and generals, some of their abodes straight out of 1910 London, others out of Spain. 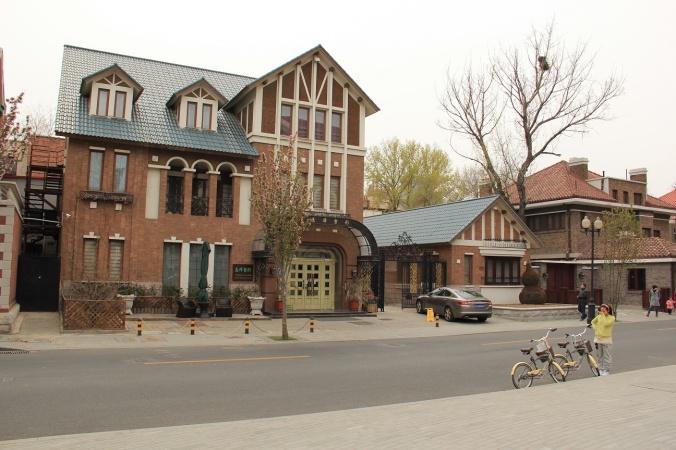 And there’s Tianjin’s biggest shopping avenue, lined with glittering monuments to consumerism and punctuated by the French-built St. Joseph’s cathedral hiding at the very end. 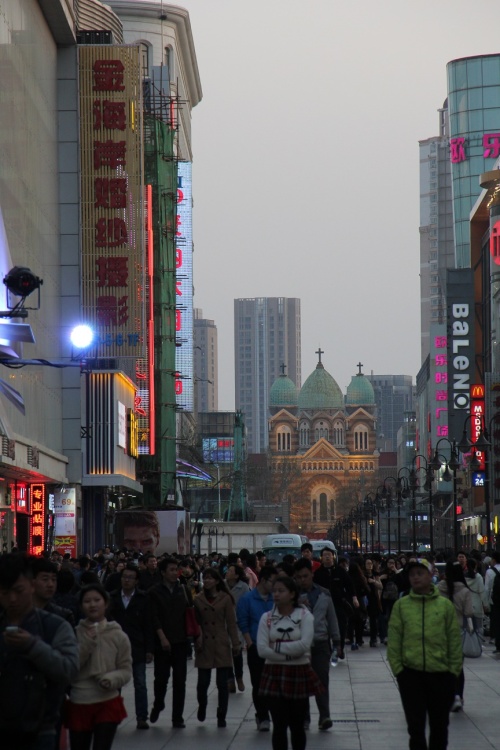 For people who liked walking, Tianjin is good for a pair of days well spent.

The city is at once much cleaner than Beijing and also more traditional. Its modern streets and streets alike have almost no trace of what one comes to expect as China, save for all the Chinese people as well as the army of food and repair carts posted at many of the intersections. Many of the European-style doorways the traditional red paper characters and door gods pasted on them. And St. Joseph’s Jesus is covered in Chinese writing. The contrast was somewhat disorienting. 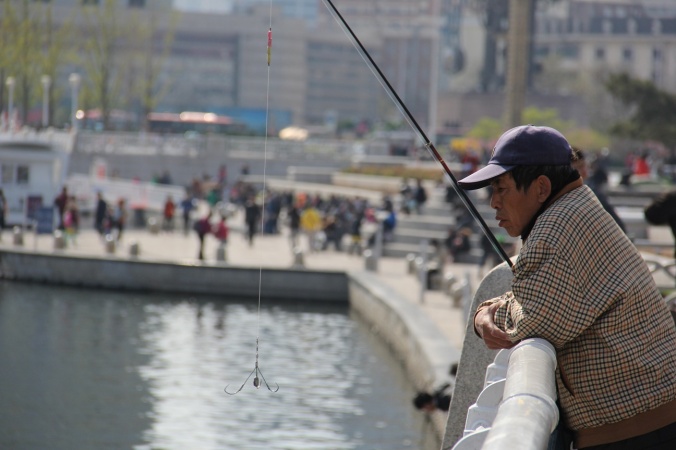 A man takes a break from fishing near the train station. 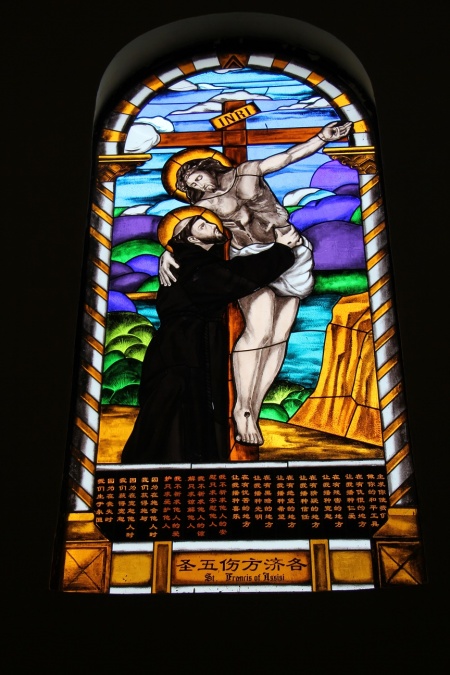 Tianjin is also well-known for its snacks, notably jianbing and 狗不理包子 goubuli baozi (translated as Steamed buns that dogs don’t pay attention to).

Jianbing are common in Beijing but originate in Tianjin. They’re basically a crepe, covered in egg and wrapped around cilantro, onion, shrimp crackers (I think), and a spicy sauce. Jordyn loves them so we tried two different styles, one of which made with green peas and fried dough instead of shrimp crackers I’ve never before seen. We decide Tianjin’s jianbing are indeed superior to Beijing’s.

Gobuli is actually the name of Tianjin’s most famous steamed dumping restaurant, which has been open for more than 100 years. More famous Chinese than I care to list have eaten there, and the Empress Cixi called its namesake dumplings the most delicious in China. The strange name (Steamed buns dog doesn’t pay attention to) originates with a villager who came to Tianjin to learn to make dumplings. His name was gou (dog). As he learned, he developed the special style that is Goubuli’s specialty, but would get so absorbed in making his dumplings that people started to say “Dog doesn’t pay attention to people, only to bao zi.” Eventually the saying was shortened to “Dog doesn’t pay attention” and the name stuck. 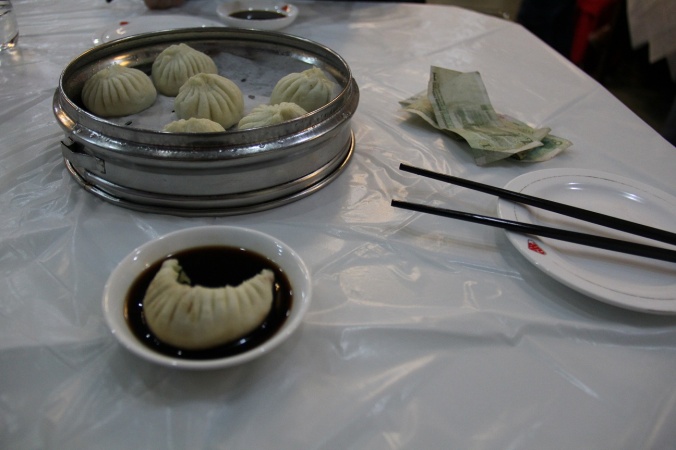 The veggie baozi at Goubuli.

It turns out Goubuli also has a branch in Beijing where Jordyn and I have eaten a few times before, though we didn’t know it until we returned from Tianjin. They are our favorite steamed dumplings. Regardless, we had to eat in Tianjin’s original branch, so for an excessive price – truly – we ordered one set of eight vegetable baozi. They were delicious, but we decided the baozi round goes to Beijing. 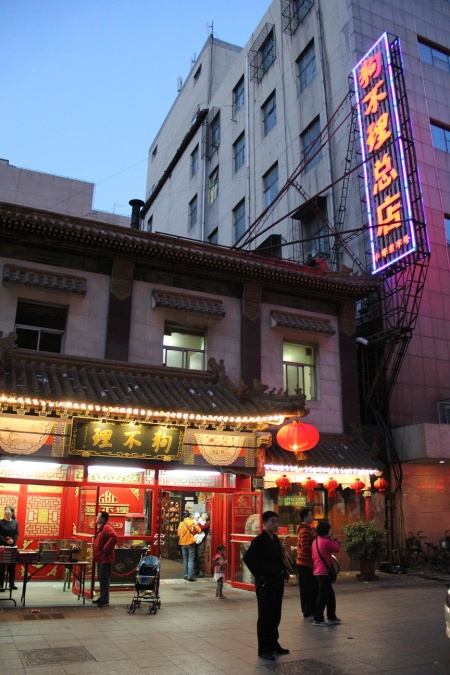