Whatever serenity I’d taken away from gazing upon the toenails faded by the time we hit the expressway.

The heat and rumble of the motor made my eyelids droop in the backseat until Jordyn nudged me with her knee. “Don’t fall asleep she,” she mouthed.

The rest of it went unsaid but clear enough: Don’t fall asleep and we might just keep our kidneys.

We really hadn’t come to Leshan on Chinese New Year’s Eve with the intent of embarking on an organ-keeping vigil. We had come to Leshan in the southwest corner of Sichuan to throw ourselves at the feet of the Buddha. And in Leshan, the Buddha has some really big feet.

The Leshan Giant Buddha is 71 meters (233 feet) tall, the largest Buddha in the world. I could easily make a chair of one of his toenails.

The Leshan Giant Buddha is the world’s largest Buddha and the world’s tallest premodern statue at 71-meters (233 feet) in height. Commissioned by a local monk in 713 AD during the Tang Dynasty, the Buddha was to be carved out of the cliff face overlooking the confluence of the Dadu and Qingyi rivers. The monk, Haitong, hoped the Buddha would calm the treacherous waters below, making passage safe for ships traveling downriver.

Haitong oversaw construction while living in a cave which still exists near the head of the Buddha. When he died in the middle of the project, construction was halted because of insufficient funds, but his disciples finally finished the Buddha in 803 AD.

Apparently Haitong also got his wish, too. The Buddha calmed the waters. Or rather, the project dumped so much stone into the water below that the river’s turbulent current shifted, making the passage safe for the trading ships plying the waters underneath the new statue’s gaze.

The statue’s majesty isn’t just skin-deep, either: His muscular bulk hides an internal circulatory system of drainage capillaries that to this day pump water through the heart of the Buddha, slowing the effects of weather-aided aging. Sadly, the drainage system hasn’t halted the degradation that has come along with the region’s rapid development and the pollution that in turn has come along with that.

Or so they say. For me, the Buddha was little short of divine.

It’s one thing to read about the Buddha. But it’s another to crest the hill that leads to the statue and catch sight of his curly-haired head, passive staring eyes, and long, straight nose that itself outsizes the human body. And it’s another to wend down the stairs next to his slender, black- and green-stained fingers. And it’s another to stand at his flaking toe, the nail large enough to curl up upon, and gawk up at his hulking form. 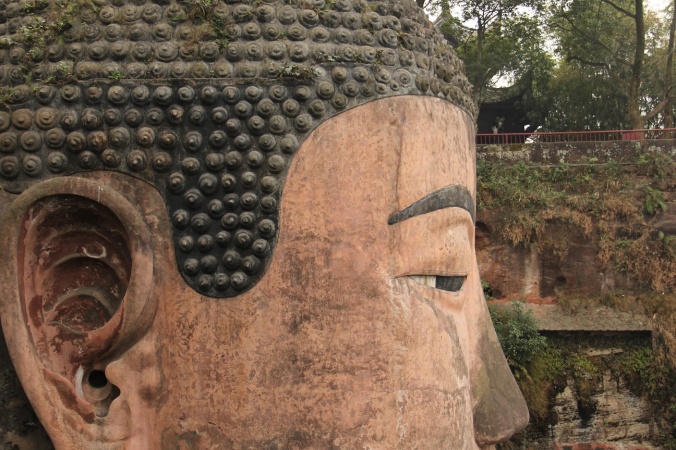 The Buddha was built in the 8th century with the goal of calming the waters of the Dadu River, which he overlooks.

And then it’s another still to ponder the fact that he’s sat there, staring across the river, for nearly 1300 years and witnessed all the changes that have time has swept across his domain as surely as the river below sweeps reeds along its eddies.

Following his gaze today takes your eyes across the river to the skyline of the rapidly developing, 3-million-person Leshan City, where we planned to catch our bus back to Zigong later in the afternoon. But with a couple hours still to spare, we climbed back up from the Buddha’s feet, passing the thousands of crumbling Buddhist figures whittled out of the red sandstone out of which the stairs too are cut, then we wandered the others mountain paths to the smattering of other Buddhist and literary sites nestled among the mountain’s greenery. The bird song that filtered through the trees made it easy to lose track of time, but my guidebook said the last bus to Zigong was scheduled to leave at 6 p.m. so we couldn’t dither too long.

Today the Buddha gazes across the river at downtown Leshan, and he’s witnessed plenty of changes in nearly 1300 years.

Tourists and worshipers alike light incense to honor the Buddha at a temple that stands just behind his massive head.

We said a face-to-giant face goodbye to the Buddha, and caught the city bus back to downtown Leshan, stopping briefly at an outdoor market to sample the street food and get into the New Year’s shopping spirit before the fireworks started later that night.

We arrived at the bus station at about 3:45 — plenty of time to spare. We walked up to the counter and asked for a pair of tickets to Zigong.

As we walked out of the bus station we must have had the “what-to-do?” look well-advertised on our faces. A portly man with rotting lower teeth and a voice like skidding rocks immediately approached us.

“To Zigong?” he asked, then without waiting for an answer launched into a spiel about how it’s New Years Eve and everyone’s with their family and he’s got a private car but its New Years Eve but he can take us anyway but it will be expensive but we don’t have any other choice. He flipped out a business card, but didn’t give me time for a good look at it before jamming it back in his pocket. We talked price. About 60 bucks total to take us the two hours to Zigong. Then he passed us off to his friend who silently led us through the parking lot to a nice-enough silver Chinese sedan. We got in.

As we stop-and-go’ed through the city traffic, the driver made a phone call. I could make out some talk about Zigong and 350 yuan, so I knew he was talking about us, but I the rest of his rapid-fire Sichuanese was lost on me. I knew it was probably normal business talk, but I started to get nervous anyway. Suddenly, carrying two fat envelopes of cash, a camera, and two laptops — not to mention our bodies — into a car with a guy we don’t know in a city we don’t know in a province we don’t know, a place where we’ve got no local contacts and don’t speak the language and have no good way to get help, suddenly that doesn’t feel very well thought out.

Then we were on the expressway. I tried to seek some Buddhist-style inner peace, but my heart pounded with each fork we approached, and I eyed each sign to make sure the driver took the turns toward Zigong. Then I started to nod off. Jordyn woke me up. She started to nod off. I woke her up. I started to nod off. She woke me up. And so on for thirty minutes, then forty, then fifty, and then we were flying through verdant rolling hills brushed yellow with flowering bushes and hadn’t seen another car in some time and there were no houses or buildings in sight.

And then, without a word, our driver pulled to the side of the road and stopped.

My heart stopped with the car. Jordyn turned to me with wide eyes, and my face went purple in the rearview mirror. Nothing happened for a timeless three or four seconds. Then the driver half turned as said:

Then we were back on the road. An hour later we arrived in Zigong, paid the man his cash, and walked back to our hotel to eat a fine meal of instant noodles and crackers.