Spring Festival transportation luck being what it has been this trip, I guess this sort of this was inevitable, although the blame here lies squarely on my shoulders. And my bank account.

Turns out 17:10 was the arrival time in Beijing, not the departure time from Wuhan. So when Jordyn and I arrive at the Wuhan airport and start parsing the board, I start to feel real sick real fast.

Also Spring Festival being what it is, we are screwed.

I stumble and Jordyn stomps over to the China Eastern ticket counter to try — try — to sort things out.

“We missed our flight,” I say.

“We missed our flight,” I say.

But Jordyn has class Monday and I have work and we’ve got to get back and I am a stupid, stupid man.

We sit in the airport cafeteria eating lukewarm, way-too-expensive broccoli and scramble through the internetz trying to find flights or trains or buses or cars that can get us back to Beijing in time without emptying my bank account. But it’s Spring Festival, and Spring Festival being what it is, there is nothing, really nothing, until Monday night.

The first standby chance comes and goes. No seats. One more left. We ask the ticketing ladies about flights to Tianjin. To Datong. To Chengde and Zhangjiakou and Tangshan. Nothing. There’s really nothing. We sit back down for a while so I can muse on the nature of my depthless stupidity. Jordyn keeps thinking and soon she’s got an idea.

We ask one of the ticket ladies: How about to Shanghai, then to Beijing? She types away for a few minutes and looks up surprised. They’ve got a flight tomorrow morning to Shanghai’s Pudong airport, then one from Shanghai’s Hongqiao to Beijing. Regular economy class. 400 apiece in total. Do we want it? Jordyn and I do some quick math, figure out how much we can get refunded for the first tickets.

New tickets in hand, half-goodish solution in the pocket we head off into the night to find a vacant hotel room.

I still feel depthlessly stupid, but as I research how to get from Pudong to Hongqiao, I realize that we’ve got about four hours spare time and have to go right through the center of Shanghai to get there. Add one more stop to the Yangtze itinerary: We’re going to see Shanghai.

In our four hour layover, Jordyn and I turbo speed through nearly everything Lonely Planet recommends in it’s “One Day in Shanghai” section. We walk the concession-era Bund. We snap photos of space-age Pudong. We cruise Nanjing East Street where China’s first-ever department stores opened up in the 1920s. We loop around People’s Square and check out the nerve center of Shanghai. We fight the crowds at Shanghai’s busiest subway interchange before heading back to the airport.

The futuristic Pudong skyline is a jarring contrast to the classical-style Bund just across the river. It’s also one of the most impressive skylines I’ve seen.

Shanghai’s got style. I like the feel of the city, the look of old(ish) mixing with new. The skyscrapers etched with Chinese characters. And the Pudong skyline really is something. But I’m also glad not to live there.

The Bund consists of buildings built mostly by colonial powers in the early 20th century. Most of these buildings were banks or hotels.

As much as Shanghai residents insist that Shanghai is the real China, after traveling to nearly two dozen cities, towns, and villages in a smattering of different provinces north and south over the last year and a half, China’s business capital just doesn’t feel like China. Perhaps that’s part of the Chinese cliche — “China: Land of contradictions — but as much fun as it was to see China’s most populous city, aside from the neon character signs, I felt like I could’ve been in any large American city or even Hong Kong, just with less frenetic energy and with less “world city” characteristics. Hong Kong without the hustle, if you will. 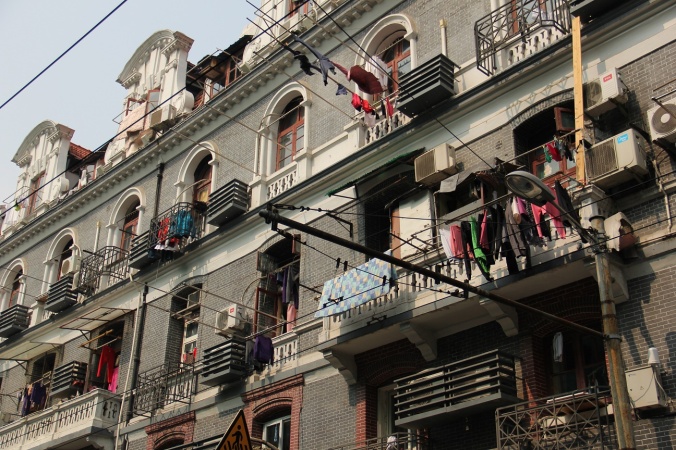 Granted, I was only there for four hours so my first impression might be meaningless, but downtown Shanghai had none of the street food smells, old people playing games, put-putting tricycles carrying mountains of junk, or other little charms that have come to define Chinese city life to me. Impressive? Yes. The China I came looking for and that I love? No.

I’ll keep telling myself it was.